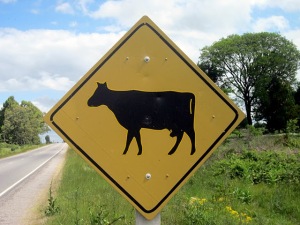 Today, we ventured out into the Uruguayan countryside on two wheels. Biking is a great and cheap way to get to know the area. Apparently, motor scooters or 4-person golf carts are the way to go here, but especially the latter look kind of silly, and don’t give you the kind of tranquility and serenity you get on your bike. Plus, on your bike you move very slowly, and can take it all in.

After trying to find a place to rent bikes (since they all seem to focus on motorized rentals here) and asking our way through town, we found bikes for $4 a person. They were not the greatest – squeaky and partially rusted – but they served the purpose.

We started out in the center of Colonia de Sacramento, and went along the Rambla Constanera, a scenic route next to the Río de la Plata. The first stop was the Plaza de Toros in Real de San Carlos, a bullring constructed between 1903 and 1912, but only used eight times in two years. Even though it was on the tourist map, it was completely deserted. Yesterday and today we both noticed a lot of abandoned houses and buildings, which could be really nice landmarks. The city of Colonia had signs on them for renovations, and in a few years, the town will most likely have caught up, and be very expensive. The sidewalks are also often broken or under construction. However, Plaza del Toro showed no signs of improvement efforts, even though it would be worthwhile in my opinion.

Passing a horse race track, we left Colonia on Ruta 21 into the countryside, the best part of the trip. We went almost all the way to El Caño. Even though it was a major road, traffic was OK, and we took one little side street onto a gravel road where we finally sat down, and had lunch. Along the way, we saw a “Cow Crossing” sign, much more like “Dinner Crossing”, and were able to enjoy lush green pastures. The bikes also allowed us to also stop by the bus station to buy tomorrow’s tickets to Punta del Este where we’re headed next. Pictures from Colonia de Sacramento and our bike ride can be accessed here, or via the photo gallery right.

Please check them out in the Picasa albums.